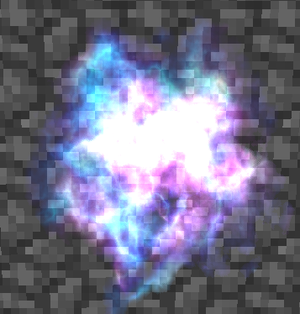 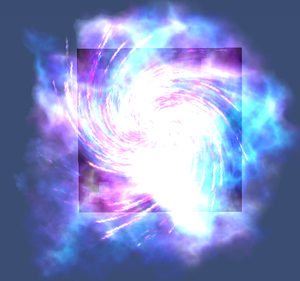 An unstable node.
Aura Nodes are centers of Aura, from which all thaumaturgists obtain their Vis. Nodes will randomly generate in the world, and can only be seen when wearing the Goggles of Revealing. They have different sizes depending on the aura inside them.

There are 4 types of nodes:

Normal Nodes are the nodes which are the most prevalent in world generation and contain no special properties.

Pure Nodes (distinguishable by glowing yellow aura as part of node) are nodes which spawn inside a Silverwood Tree or can be found on very rare occasions in random locations in the Overworld. Any Flux that is added to a Pure Node will slowly be removed by the nature of a Pure Node. These nodes can also be generated via growth of a Silverwood Sapling; however, the downside of this is that such nodes are often pitifully small, containing 50-100 Vis. 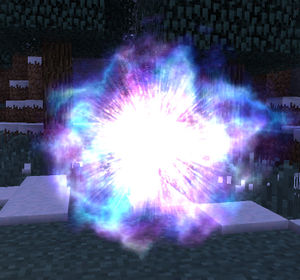 A pure node in the wild

The amount of Flux in an Unstable Node will slowly increase regardless of how responsible a nearby thaumaturge's practices are. Such nodes can be found randomly in world generation, but are fairly rare. They can often be found on top of a Large Obelisk. 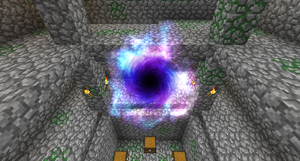 A Dark Node within a Barrow Hill

Dark Nodes are nodes which spawn very rarely in world generation and have a higher chance of spawning in a Barrow Hill. These nodes will rapidly increase in flux, generating flux mainly of Malum and Mortuus aspects, which create wisps which are innately hostile. However, these nodes often have more vis than normal nodes.

Each Aura Node directly supplies Aura within a certain range. The range of any Aura Node is equal to one-quarter of the maximum Vis it can hold:

Nodes will move towards each other and combine if their current vis levels are high enough to overcome the gap between them. Growing silverwood saplings is a common reason for this. The nodes generate a significant amount of flux and drain vis from surrounding nodes when combining, which can cause the spawning of Wisps, Giant Angry Zombies, spontaneous rain/thunderstorms or spontaneous lightning.

Nodes move towards each other when: Distance^2 < average of current vis levels

Warning: This can result in a node with a lower max vis than the larger node if the larger node has less current vis at the time of the merge. This most often happens when spawning a Silverwood Sapling near a node. New Silverwood nodes spawn with between 50 and 100 max vis, and drain 1.5x that amount from the nearest node with the requisite vis. To guarantee the combined node won't smaller than the original node, the original node must have at least 251 vis.

Two big nodes can combine from a distance of over 20 blocks. Warning: When two nodes combine, it will cause a massive disorder in the aura and drain much from the nearby nodes.

Nodes come in many sizes based on how much aura they have in them. Most nodes have 200-800 aura in them. Certain things have very large nodes in them though, like Desert Temples or Witch Huts. Some biomes also affect the sizes of the nodes. For example, both jungle biomes and mushroom biomes generally have large nodes. The Twilight Forest has many big nodes together near Questing Ram. The max size of a man made node is currently found to be over 20,000, while the largest natural node found currently stands at 1524 aura, found by WraShadow in the Twilight Forest in the Mindcrack modpack (seed: 1091106245).

URL to the image of the largest natural node found

For a heavy Thaumcraft 3 user, one can create one's own Pure Nodes instead of using Normal Nodes when one has a supply of Silverwood Saplings available. Pure Nodes will share the Flux between themselves, cleansing themselves of flux much faster than normal nodes. If there are any Normal Nodes nearby, one can combine them with one's Pure Nodes after the Pure Nodes have more Vis than the Normal Nodes.

If Wisps are located in a prospective area for building a house, this is not a good area to build a house in and should only be returned to once one has created an infrastructure for manipulating nodes. Wisps and other negative effects can spawn. Wisp spawning can be negated by making Goggles of Revealing and building a box around the node to contain the Wisps, but all other negative effects will still occur.

Moving nodes require the research of the Crystal Core. The Crystal Core is a very difficult item to get, as it requires four Mixed Crystal Clusters and a Nether Star, which requires a defeat of the Wither Boss. It also requires several aspects and some Vis at an Infusion Altar in its creation. The Crystal Core also requires 8 Obsidian Totems to function. Note that there can be no blocks obstructing the empty space between or above the totems, and this includes the invisible light blocks spawned by Wrathlamps.

Note: The Theory of Everything is required to research this. It is a Tier 3 item.

During the movement of a node, a large amount of Flux is generated, possibly causing Wisps and other Flux events. Doing so is more useful for moving flux-filled nodes away from one's house than moving a high-vis node towards one's house, as the latter would likely cause more problems than it would cure. The former would also allow for easy farming of Wispy Essences of various types after the relocation of the node, allowing for the reclamation of excess aspects released into the air by irresponsible thaumaturgical practices or by a Crucible without Arcane Alembics attached. 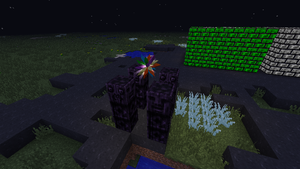 The construct of the Aura Node Mover. 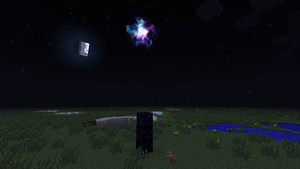 An obsidian Totem near an Aura Node

If Thaumic Bees is installed, one can use the Node Bee to move nodes. This bee has "Aura Attract" as its effect, an effect which very slowly moves the nearby node closer to the Apiary or Alveary in which the bees are located. This bee can be created by breeding a Pure bee with a Flux bee, and they have a 2% mutation chance. However, the Node Bee is a much slower alternative to the node moving construct involving Obsidian Pillars and a Crystal core.

This page was last modified on 20 April 2019, at 01:23.
Content is available under Creative Commons BY-NC-SA 3.0 unless otherwise noted.