Silverwood Sapling is a block added by the Thaumcraft 4 mod. It can be grown into Silverwood. Bone Meal cannot be applied to it but you can grow it instantly by using Hoe of Growth or greatly speed growth time by placing Lamp of Growth nearby. Only 1 sapling is required to grow a tree.

Silverwood is a magical tree that spawns in most of forest-based and plains-based biomes in Overworld, but it is most common in Magical Forest biome. It is about 16 blocks in height and 7 blocks in width and length. It has a trunk of 5x5 blocks in diamond shape.

Each tree consists roughly of 64 Silverwood Logs and enough Silverwood Leaves to drop 1-3 Silverwood Saplings. Sapling drop rate can be increased if Fortune III was used to break the Silverwood Leaves. The tree usually holds 1 Aura Node in it, rarely more. It can hold up to 5 Aura Nodes in the central layer of its logs, but only 3-node trees are known to be found. The nodes will get destroyed when the block they contain in is broken. This block can be usually identified by a black dot on its side.

Research aspects in this item[edit] 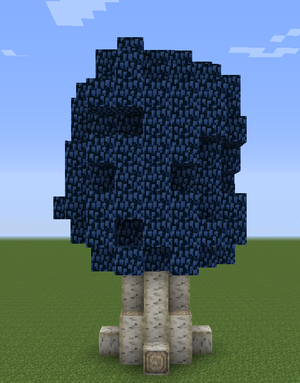 "Greatwood Trees:
These large and majestic trees can be found dotted all over the countryside. Their wood is able to absorb impressive amounts of magic making it a popular component in the crafting of magical devices.

Silverwood Trees:
These rare and magical trees are a wondrous sight. Their leaves shimmer with magical energy and their pale, soft wood is valued for its purifying properties. The trees magical nature is such that aura nodes often form within their hearts - this feature alone makes a silverwood sapling a prize beyond measure.

Shimmerleaf:
The strange, glowing flowers only grow in the shadow of Silverwood Trees. They can be harvested and pulped to produce quicksilver.

Cinderpearl:
Found only in the hottest of climes, these plants burn with elemental fire. They can be harvested and ground to produce a fine powder akin to Blaze powder.

Mana Pod:
This strange, pod like plant is only found growing on trees in magical forests. They grow very slowly and when harvested usually only yield one or two beans. These beans, known as Mana Beans, contain concentrated amounts of essentia. They can also be consumed, though the results are often a bit unpredictable. They can be replanted, but cultivation is difficult and time-consuming. Wild mana pods usually only produce primal aspects, though it is said that planting beans adjacent to existing ones sometimes result in beans with compound aspects."

You wil need a Rod that can hold a great amount of Vis to increase level of magic. And it is also used as material with various purpose.

Silverwood Sapling (Thaumcraft 4) can be used to create the following items:
Category:

This page was last modified on 20 March 2019, at 19:00.
Content is available under Creative Commons BY-NC-SA 3.0 unless otherwise noted.