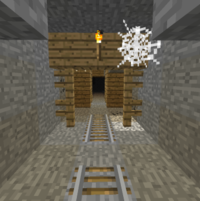 Rarely Chests or Minecarts with Chests can be found as well, which will contain loot, similar to Dungeon chests. They are also the only part of the mineshaft changed by FTB mods, which add additional loot possibilities. Most mineshaft loot can also be found as dungeon loot.

Mod loot is added to the chests in addition to whatever items are selected by Minecraft. It may overwrite Vanilla loot placements, thus resulting in a chest with only mod loot present.

This page was last modified on 7 February 2020, at 20:08.
Content is available under Creative Commons BY-NC-SA 3.0 unless otherwise noted.