The Nuclear Reactor is a block added by the IndustrialCraft2 mod.

It is a method of generating EU or alternatively Steam via the heating of IC2 Coolant. Building a Nuclear Reactor power generation system is a significant time and resource investment and requires a solid commitment from the Player. 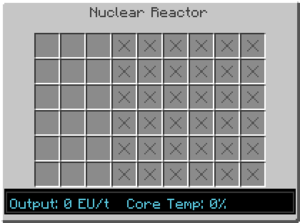 A freshly placed Nuclear Reactor has an internal GUI that can be accessed by Right-clicking on the Reactor. Initially, there will only be 3 columns of 6, each space accepting a single component. The GUI will gain another column of internal space for each Reactor Chamber attached, allowing for bigger builds.

At a minimum, the reactor requires one Uranium Cell and one Heat Vent side by side in the GUI in order to produce any energy. The reactor block or one of its attached chambers must also be in direct contact with a Redstone signal, such as a lever. Once powered, the Uranium Cell inside will begin to produce EU and heat, the former of which should be wired off to an energy storage network, while the heat is dissipated via the vent. In this mode, the Reactor operates at 50% of its potential.

Handling a Uranium Cell, a Fuel Rod or Pellets of RTG Fuel without proper protection is very ill advised due to the fact that the radiation poisons the Player's health and will continue doing so [2] until the items are droped or inserted in a chest. Wearing a Hazmat Suit consisting of a Scuba Helmet, Hazmat Suit, Hazmat Suit Leggings and Rubber Boots is mandatory to handle those items. The offending items can be stored in a Containment Box.

As mentioned above, Reactors produce heat. If said heat isn't properly removed from the reactor while it is active, then the internal temperature will reach a critical point (100%) causing the Reactor to blow-up making significant damage to the surrounding world. Keeping a reactor running with a neutral (the reactor vents as much heat as it produces) or a heat deficit state (the reactor can vent more heat than is being produced) are the best two options available to avoid this, easily done by adding a few extra cooling elements to the GUI. If the Reactors Core Heat is around 50% the Reactor will set the surrounding on fire, if there is something to burn, like Chests or Planks.

The IC2 Hot Coolant that is pulled from a Reactor, is very hot. When running a heat reactor, if at any point the GUI shows that there is no blue coolant present in the reactor but only hot coolant, then do not break open the pressure vessel cube as the hot coolant will escape, and could set the Player on fire.

The New IndustrialCraft Reactor Planner is a Java web application that simulates the behavior of the Nuclear Reactor. It provides a means to develop and test reactor designs without the risks of explosion, and provides instant results over what might be possible in a Creative world.

Nuclear Reactor can be used to create the following items:

This page was last modified on 14 April 2019, at 17:10.
Content is available under Creative Commons BY-NC-SA 3.0 unless otherwise noted.