The Armor Tab is an Inventory tab introduced by Tinkers' Construct which functions similar to the Crafting Tab, except instead of the crafting grid, there are more slots for apparel. At the current time, many of these slots are not used.

Currently it is possible to place any item in any slot, except for the four standard armor slots, which are restricted to the respective armor type. Not all items will have an effect though. 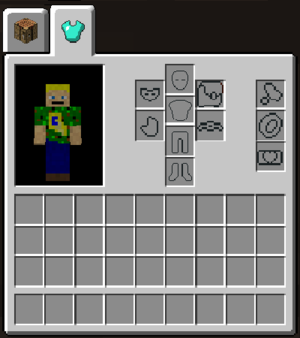 An Example picture of the armor tab.

This page was last modified on 21 April 2019, at 23:57.
Content is available under Creative Commons BY-NC-SA 3.0 unless otherwise noted.