Gate of the Voidwalkers

Gate of the Voidwalkers is a multiblock structure added by the Gadomancy mod. It allows the player to create Eldritch Portal without any need of exploration.

Gate of the Voidwalkers
Into the abyss...

""He who fights with monsters should look to it that he himself does not become a monster. And when you gaze long into an abyss the abyss also gazes into you."
-Friedrich Nietzsche

At first it was just a miracle, the discovery of the primordial pearl. Its light revealed many secrets of the world and of creation, but after a while, you began to feel that one pearl just wasn't enough. Its light was warm, but seemed fitful and weak, as though it was only a spark.

Dark, ancient whispers have begun to pervade your consciousness. More powerful and insistent that before, they speak of a road not meant to be walked, a way too dark to see, a path to the greatest of all powers, hidden beyond the edges of the void. You suspect you know exactly what the voices speak of, as you have a piece of that power in your possession. Now you have only to solve the problem of finding this invisible, intangible path.

Not surprisingly, the solution to the problem of entering the path came directly from the eldritch obelisks. These ancient devices each contain a node that, when enough vis is directed through, can be widened into a small stable portal. By altering the functions of a compound recharge focus to mimic the functions of the obelisk, the same type of vis redirection can be achieved.

This new focus is not unlike the normal randomization focus, as it also needs to be placed atop a node manipulator in order to function.

In order to build the gate frame, a node manipulator must be constructed in the same manner as normal, but with four ancient pedestals around the outside and the redirection focus in place of the usual randomization focus. The Gate of the Voidwalkers needs 150 of each primal aspect vis to be assembled.

Once assembled, four eldritch eyes must be placed on the pedestals somewhere around the gate, and a staff/wand containing at least 120 vis must be placed in the manipulator.

Once the manipulator drains the necessary vis, the node atop the focus will be forced to open into a portal.

At first glance it resembles any other eldritch portal, however when you look closer, you can see that it it far stronger and less stable than the others. You can see that the Gate will not survive more than one entity passing through, so return via the same portal will be impossible. As you step through the Gate of the Voidwalkers, you feel an odd sense of anticipation and forboding, as though hundreds of ancient eyes are watching silently as you walk into the depths of the abyss..." 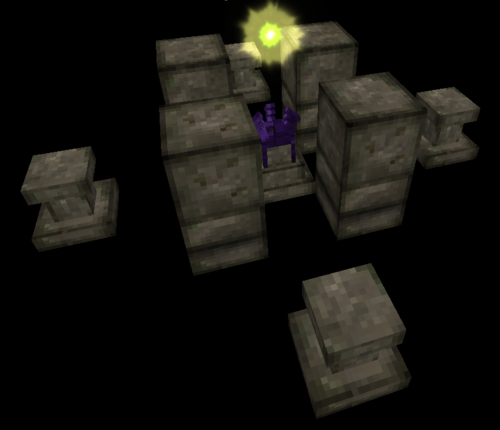 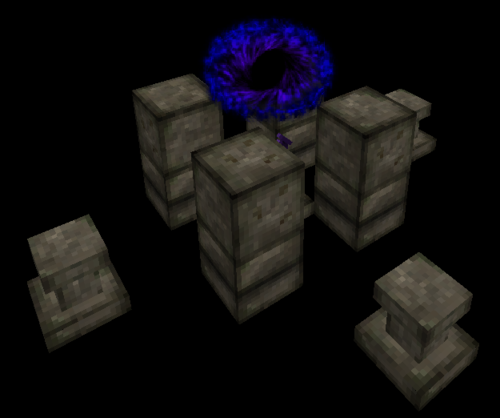 The activation has just completed.
Category:

This page was last modified on 1 September 2016, at 11:57.
Content is available under Creative Commons BY-NC-SA 3.0 unless otherwise noted.